As a storyteller, my goal is to connect people with wisdom through the ancient art of story.  I tell traditional tales (fairy tales, folk tales, myths, legends, etc.) as well as true stories from my own life.  I love insights and lessons best when they’re wrapped in  funny or poignant stories.  I began my storytelling journey in Champaign-Urbana and have continued it in Minneapolis, where I perform at curated and open mic shows for both adults and children throughout the Twin Cities. 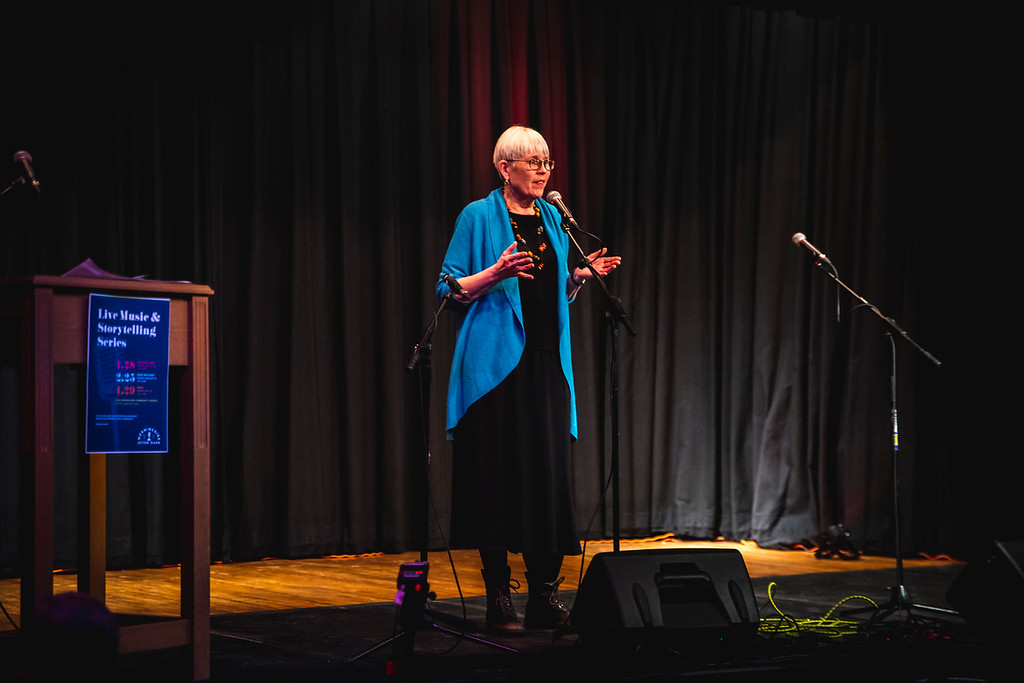 I grew up in a small city on the Erie Canal.  For most of my life I worked in libraries, except for two summers when I cooked at a children’s camp.  My personal life mission is to connect people with sources of information and wisdom, and to have fun doing it.  I practice and celebrate oral storytelling as an ancient, effective, and inspiring way to foster those connections.

While employed as a library administrator, I took a course in Storytelling at the University of Illinois School of Information Sciences, and that’s when I fell in love with the art of storytelling.  Bells ringing, angels singing, lights flashing Love!  Everything about storytelling delights me–from interacting with audiences of all ages, to crafting an original story, to delving deeply into folklore and other sources to discover new (to me) tales to be shared.

I began my storytelling career in Champaign-Urbana, Illinois, where I performed several times at the iSchool Storytelling Festival, as well as numerous showcases and benefit shows put on by the Champaign-Urbana Storytelling Guild. I organized and emceed story concerts for the local celebration of World Storytelling Day.  I appeared in many venues, including the Celtic Knot Public House in Evanston, IL, and the open mic at Dominican College, Forest Park, IL, hosted by Illinois Storytelling, Inc.  I was invited to tell at the Champaign-Urbana Folk & Roots Festival, as well as the public library-sponsored Read Across America event. I also shared many stories during Sunday services and inter-generational coffeehouses at the Unitarian Universalist Church of Urbana.

After moving to Minneapolis in late 2015, I expanded my repertoire to include personal and family stories as well as traditional tales from around the world. In addition to being hired for private and community events, I’ve competed at Story Slam MN!  at Kieran’s Irish Pub and won prizes several times–including second place in the 2018 Grand Slam Finals.  I’ve also performed at Cheap Theatre at the Black Forest Inn; PJ Stories, monthly evening story hour for children at the Underground Music Café; the open mic segment of the monthly Story Club Minneapolis at the Bryant-Lake Bowl; shows at Strike Theater; and The Moth Twin Cities.  I was chosen as a showcase teller at the Northlands Storytelling Network’s  2017  and 2019 Confabulations.  Several of my stories have been broadcast  on “Stay Human,” a weekly radio show hosted by Michael Goldberg on KAXE in northern Minnesota. I draw on my ethnic background (English-German) for stories I share with students at the annual Festival of Nations.  I told stories in tandem with Pam Schweitzer at the 2018 Minnesota State Fair.  And most recently, I took first prize in the Great American Story contest in Park Rapids. MN.

I am a member of the Board of Directors of Story Arts of Minnesota and an active member of the Twin Cities’ Children’s Storytelling Guild.